How to Read Residential Electric and Natural Gas Meters 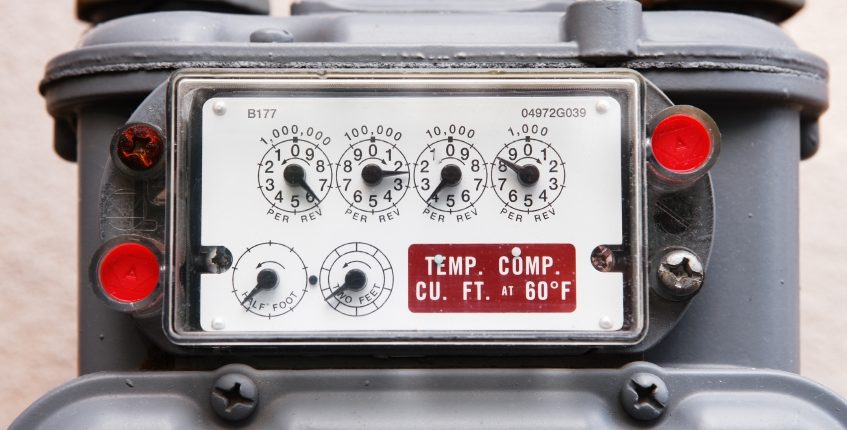 You may also wish to contact your local utility companies for more information about reading your meter. If monthly information is good enough, your utility bills could have all the information you need. Just be sure the bills are based on actual, not estimated, meter readings, and be aware of when the meter was read, because the time period between readings can vary. Contact your local utility if you are uncertain about this.

The standard electric power meter is a clock-like device driven by the electricity moving through it. As the home draws current from the power lines, a set of small gears inside the meter move. The number of revolutions is recorded by the dials that you can see on the face of the meter. The speed of the revolutions depends on the amount of current drawn — the more power consumed at any one instant, the faster the gears will rotate.

When reading an electric meter, read and write down the numbers as shown on the dials from right to left. When the pointer is directly on a number, look at the dial to the right. If it has passed zero, use the next higher number. If it has not passed zero, use the lower number. Record the numbers shown by writing down the value of the dial to your extreme right first and the rest as you come to them. Should the hand of a dial fall between two numbers, use the smaller of the two numbers.

Natural gas is commonly measured by the cubic foot, and you are billed by the thousands of cubic feet (MCF) or hundreds of cubic feet (CCF). You may also be billed by the therm, which is about the same as a CCF or 100 cubic feet. To measure the amount of electricity or gas that you use, the utility installs a meter between the incoming electric power or gas lines and the point of distribution at the house.

A gas meter is driven by the force of the moving gas in the pipe, and also turns faster as the flow increases. Each time the dial with the lower value makes one complete revolution, the pointer on the next higher value dial moves ahead one digit.

When reading a gas meter, read and write down the numbers as shown on the dials from left to right (opposite of an electric meter). It is important to note that on both types of meters, the hands of adjacent dials turn in opposite directions to each other.

Note that some newer electric and gas meters use digital displays instead of dials. The difference between one month’s reading and the next is the amount of energy units that have been used for that billing period.